On the 12th of March there’s been updates in 2010. That year there was four updates.

For starters, some construction in the mine began as new rooms (the mine cave, now known as the gold cave, the hidden lake, and finally the underwater room) A box, wood, a table, and a few other items were placed in the Mine to show that there was some construction taking place. The second update in 2010 was a new pin, the Buckle Boot Pin. The pin’s name has since changed to just the Boot Pin. This pin could be found at the Dance Lounge, a room that is now known as the Arcade. This pin is Club Penguin’s 116th pin and was the sixth pin to be hidden in that room.

The final two updates in 2010 were the igloo and furniture catalogues receiving an update for that month. The Green Clover Igloo was released, costing for 2,050 coins. The furniture catalogue had some St. Patrick’s Day related items. 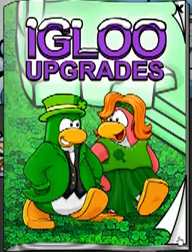