The 25th of December was a Tuesday which isn’t Club Penguin’s typical update day of the week, however Club Penguin released the newspaper early that year. In Club Penguin Times Issue 115 the first ever Coins For Change results were announced. During Coins For Change 2007 over 2.5 million penguins donated a total of more than 2 billion coins. 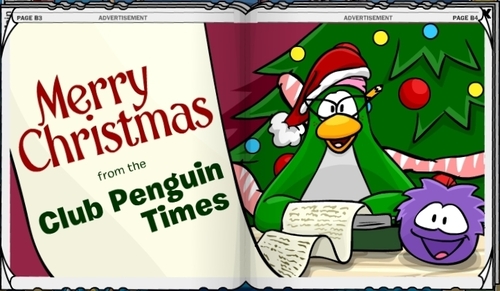 In 2009 Quest for the Golden Puffle was released at the Stage for the fourth time. The catalogue had a Penguin Play Awards Winner stamp on the front cover. The Crook & Flail item was also hidden in the catalogue. Finally, the igloo music was also updated with some new holiday tracks.

In 2013 Club Penguin released a new episode of #WaddleOn. It was their 20th episode. It was a musical called Someone Like Me To Like Me.