Last Wednesday the first ever Club Penguin television special “We Wish You a Merry Walrus” aired in the United Kingdom, followed by an iTunes release in the United States the next day ahead of its TV debut on Disney Channel in the states today, the 24th of December. The special is quite good. It has top notch animation, great voice actors, and a very well written plot along with a few jokes. This post does contain spoilers, so read on at your own risk! 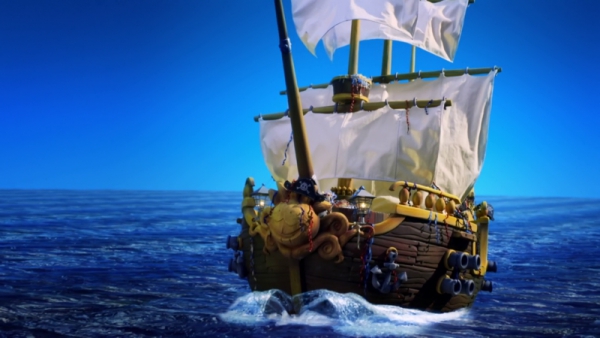 The special begins with Rockhopper sailing his ship in the ocean, saying “What a merry party that was! I’ve never seen the like.” Then Rockhopper notices the viewer and says “Oh hello, Captain Rockhopper at your service. What’s that you say? You were off in the bathroom and missed the whole hullabaloo? Well, lucky for you I downloaded it off the internet. I ain’t saying how, but I am a pirate!

With that, Rockhopper pushes a button on his electronic device and the theme song intro to We Wish You a Merry Walrus begins. The theme song is sung by Cadence.

We wish you a very Merry Walrus 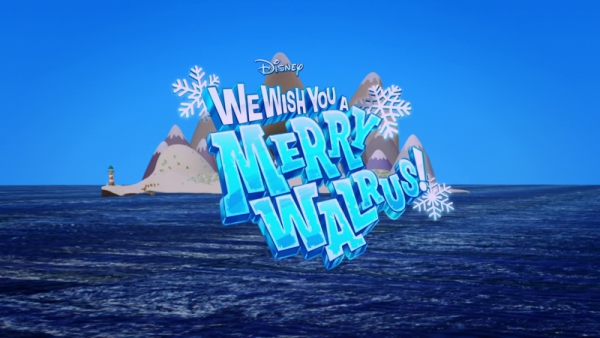 Penguin hearts are full of cheer

Celebrations, all the decorations
Lining up for the bucket brigade 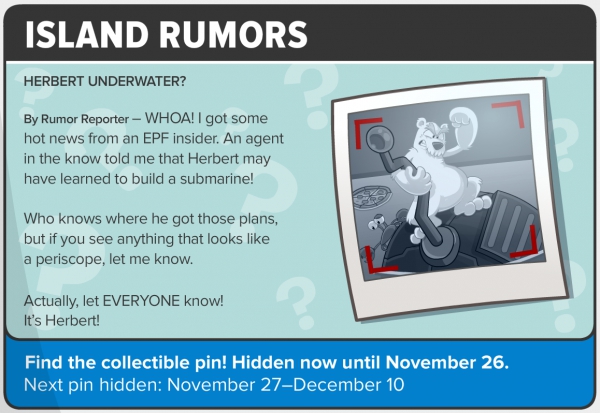 Many suspected Herbert was going to make an appearance at the Pirate Party, but as it turns out he didn’t. The submarine was in the water in We Wish You a Merry Walrus! 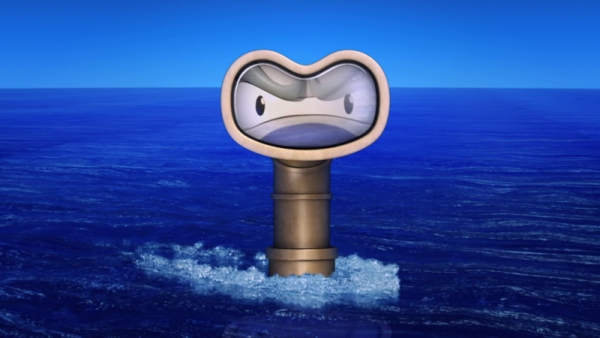 The scene changes to Herbert in his submarine saying the noise from the island of penguins celebrating Merry Walrus is not tolerable. He reveals he is planning to shut the island up with Operation Silent Night. And with that, the scene changes back to Club Penguin. This is the scene where Roofhowse is first introduced. He’s the new kid on the island and a bit of a klutz. In this same scene we’re also introduced to the football lover Blizzard, who gives Roofhowse the nickname Fumbles, and the master igloo decorator, Sydmull. I’m not going to spoil everything that happens in the show, but when Roofhowse shows off his igloo decorations something very funny happens. :) 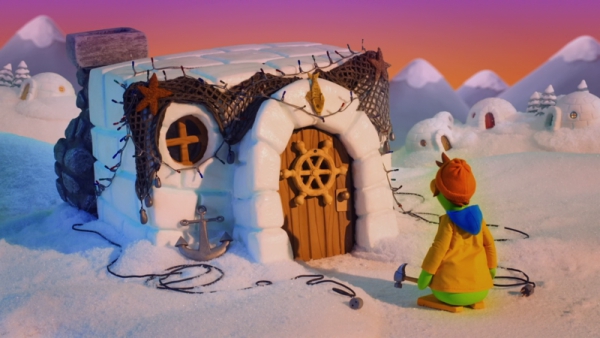 From here we’re introduced to Jangrah, who is president of the Igloo Owners Association, and also her friend Lorna. Jangrah asks if he’d like to help out with the stage production of Merry Walrus, to which Roofhowse declines.

Roofhowse: Thank you, but I don’t know how long I’ll be staying.
Lorna: Oooh, a drifter. Always chasing the ice flow. Or maybe on the run from the law. I get it! But…it must be tough to make friends…
Jangrah: Not at Club Penguin it’s not. We’re all friends here, and nothing is more important thank taking the time to- *watch beeps* Oops! Gotta run! It’s show time!

With that, Jangrah calls everyone to come with her to the Stage. Lorna goes too, but then comes back with a flashlight to tell Roofhowse about an ancient prophecy.

“Just so you know, there’s an ancient Club Penguin prophecy that a mysterious stranger would one day save Merry Walrus from complete annihilation! And not to be overly dramatic, I also had a dream about waffles….” 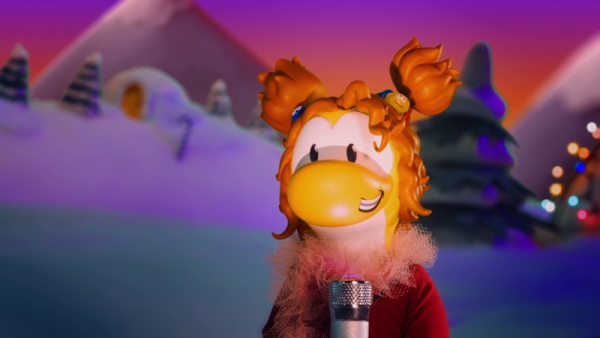 On to the next scene! Lorna is at the stage introducing the play and Merry Walrus. The play is very humourous. So far there has been many jokes and funny scenes and at this point we’re only 6 minutes into the 22 minute episode! 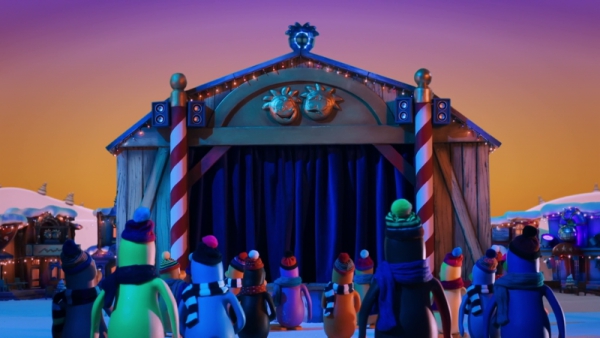 With the play over and the night setting upon Club Penguin, Roofhowse is seen away from the community on Club Penguin and talking about how he feels that even though he gave it a try, the Club Penguin life is not the life for him. All of a sudden a Blue Crystal Puffle comes out of the sky! It tumbles into him and together they roll down a hill, forming a giant snow mound with the two of them in it. It rolls down the hill, all the way to the Stage, where the cast of the play still is. Roofhowse shows Blizzard, Sydmull, Jangrah, and Lorna the Blue Crystal Puffle. The Puffle is trying to alert them that Merry Walrus needs their help! What could he possibly need? 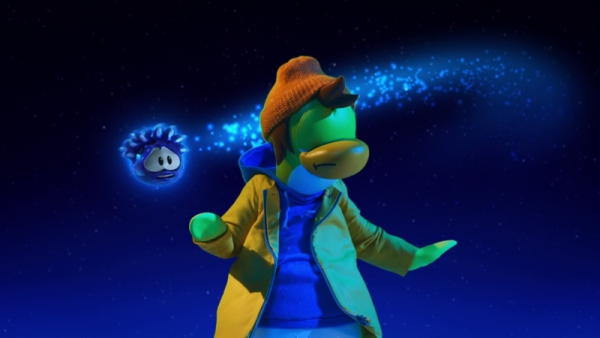 The Puffle darts off towards the Beach on Club Penguin, so the gang of penguins follow him. The Puffle can float so it goes over water, which is an issue for the gang of friends since they can’t continue on. Roofhowse’s small boat is docked at the beach so he gets in it and sets sail in the icy waters surrounding Club Penguin so he can continue following the Blue Crystal Puffle…leaving everybody behind. 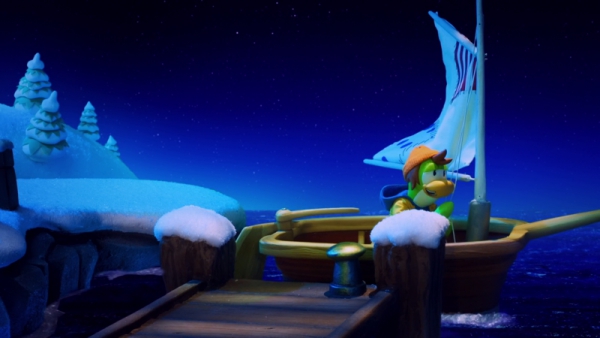 Not to worry though, as suddenly Rockhopper appears! 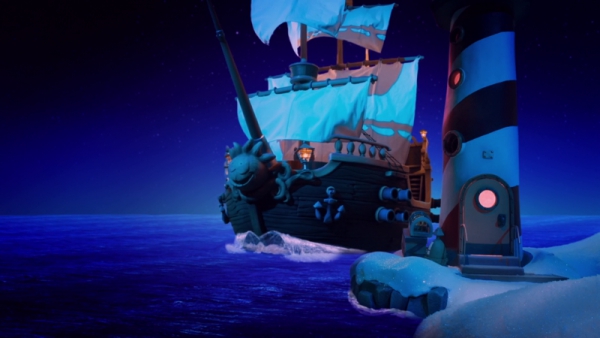 The gang of four gets on his ship and soon enough they catch up to Roofhowse’s small boat, so they invite him aboard. Rockhopper reveals to the penguins that they have to set sail to….Merry Walrus Island. Dun dun dun! The trip isn’t an easy one, but luckily the team makes it to Merry Walrus Island unharmed. 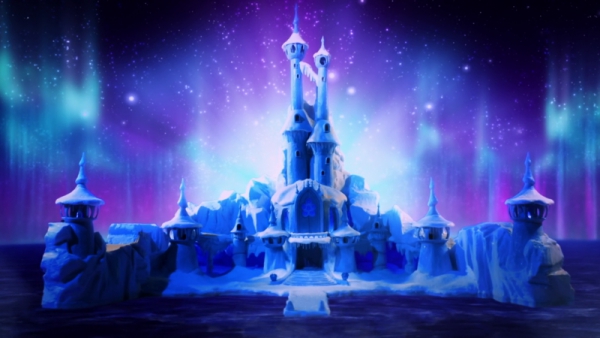 The Migrator is docked and they exit the ship. Merry Walrus then makes an appearance from the ice castle…except it isn’t Merry Walrus at all! It’s Herbert! 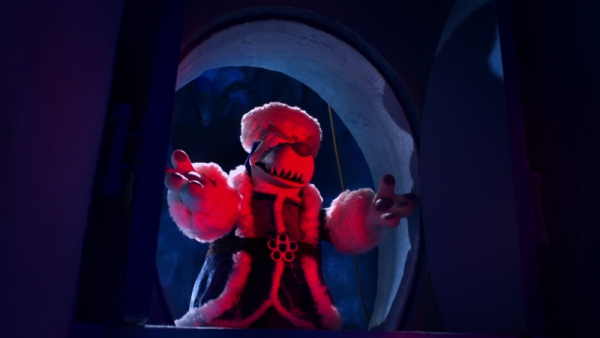 Herbert: The holidays are full of surprises!
Klutzy: *Uses claw to cut rope, which causes a net to fall down on the gang* 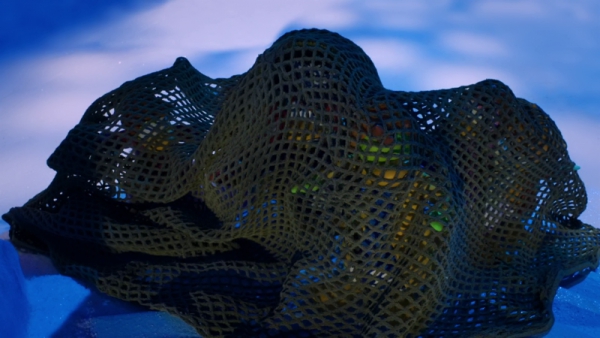 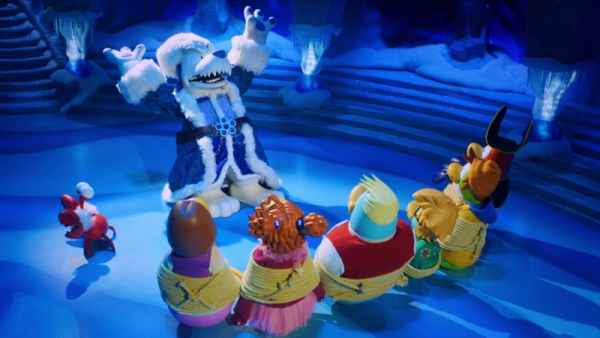 It looks like Herbert is ready to start Operation Silent Night! He reveals his plan to capture all the Blue Crystal Puffles, pose as Merry Walrus, and trap the penguins on Club Penguin under a soundproof chamber, which Herbert has dubbed “The Snowglobe of Silence”. 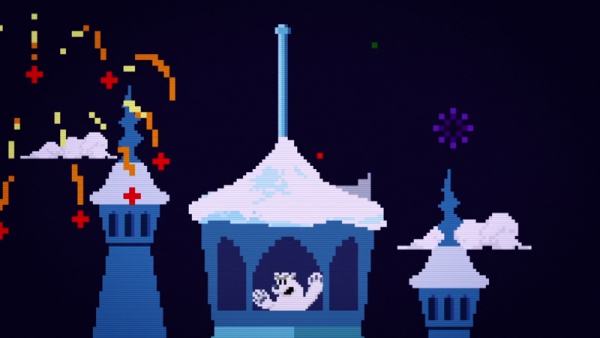 With the pesky penguins along with Merry Walrus tied up and out of the way, Herbert steals Merry Walrus’ sleigh and takes it to Club Penguin. 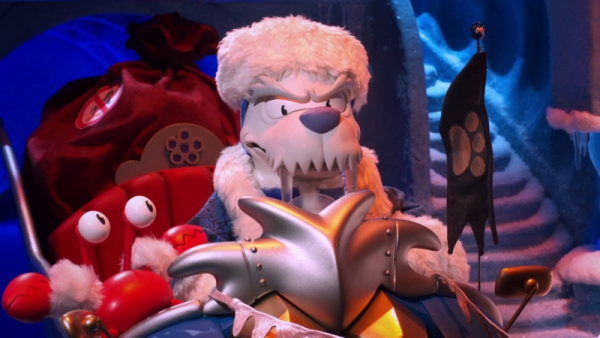 Luckily, thanks to the Blue Crystal Puffle named Enrique, he sets the gang of penguins as well as Merry Walrus free and together they take his second sleigh to Club Penguin so they can stop Herbert, hopefully before  it’s too late. 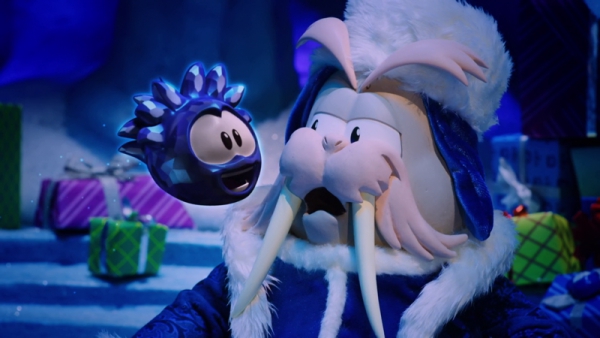 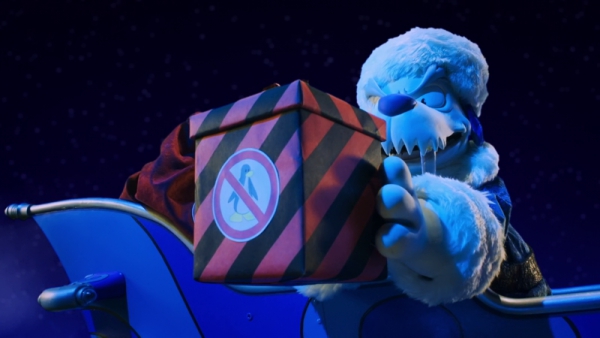 It takes some teamwork, but luckily they stop Herbert from trapping the penguins in the soundproof chamber…and Herbert and Klutzy get trapped in there instead! With Herbert out of the way, Cadence starts spinning some vinyl, playing Puffle Shuffle. Herbert thinks he’ll get some peace and quiet in the chamber, but instead he can hear the music loud and clear…not to worry though, as in all the chaos Merry Walrus gave Herbert a present, which we find out is noise cancelling headphones. Herbert quickly opens the present and slips them on. 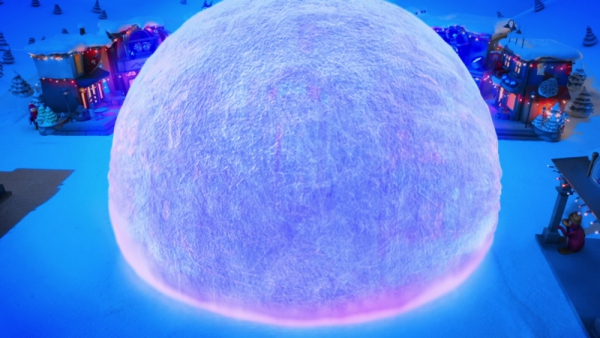 While the penguins are busy partying Rockhopper and Roofhowse share some dialogue. Rockhopper asks Roofhowse if he’d like to join him on his next great adventure, but Roofhowse declines. After that night’s events he decides that Club Penguin is best for him, as he likes it there.

That’s pretty much where the story ends, as it shifts back to Rockhopper sailing on his ship just like he was doing at the beginning of the show, as if you recall he’s retelling the full story. With that, Rockhopper and Merry Walrus say a few words, and the credits start to roll. 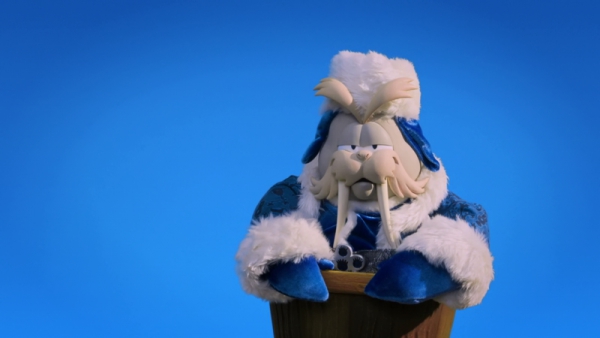 Overall, it was a great special! Like I said earlier the plot was fantastic, the animation was top notch, and there was a constant flow of witty dialogue and jokes. I’d definitely love to see another Club Penguin special at some point in the future. We Wish You A Merry Walrus is available on iTunes in the United States for $2.99 HD/$1.99 SD and will be on Disney Channel in the United States tonight at 6:00 PM and 9:00 AM tomorrow.