September 10th in Club Penguin History has only had updates in 2010. Both updates were Fall Fair related, as that month’s party was currently in full swing. A new pin was released, Club Penguin’s 134th one. It was the Fair Ticket Pin and you could pick it up at the Book Room on the bookshelf. 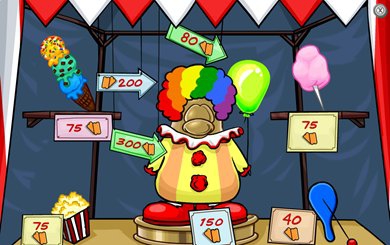 Also on September 10, 2010 new Fall Fair prizes were available to be redeemed with tickets from the Fall Fair games. The prize booth located at the Forest contained items for everyone. The new items added to it were the Green Cosmic Hat and the Blue Fuzzy Viking Hat. The newly added items at the members only booth, which was located outside the Puffle Circus, were the Popcorn and Green Balloon. The Blue Paddle Ball was also added as a returning item. This item has been available to everyone in the past and not just members like it was in 2010.