On the third of March there were updates in 2006 and 2008. There was just one update both years.

In 2006 that month’s Penguin Style was released. It was the first one to contain shoes, which many penguins requested. 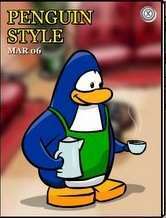