In 2008 there was only update. Aqua Grabber was released, however it wasn’t exactly like how it was today. Rather than there being levels like Soda Seas, you had to fetch parts of The Migrator underwater and bring them to the net. (In January 2008 an iceberg hit Rockhopper’s ship and it sank) As long as you retrieved all of the pieces you would earn the Golden Wheel Pin.

In 2010 there were several updates. That month’s party, the Puffle Party, was released. The free item for everyone was the Puffle Hat and members could pick up the Puffle Jacket. 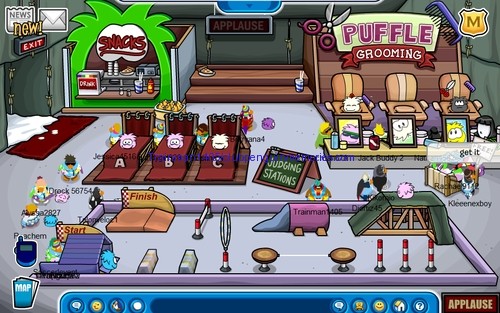 Along with that a new furniture catalogue was released with some Puffle and casual furniture related items. The igloo catalogue was also updated with a few minor additions.