As first pointed out by Club Penguin Blogger Saraapril earlier today, the news section of Club Penguin’s page on Disney UK has been updated with a glimpse of what to expect at Club Penguin’s first ever Hollywood Party, which starts on the 14th of February and ends on the 26th. (really the 27th) 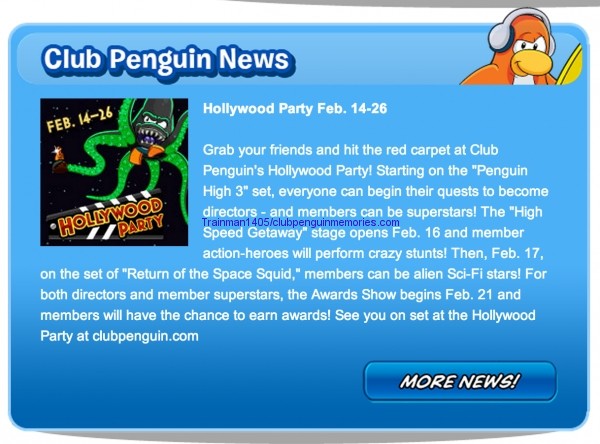 Grab your friends and hit the red carpet at Club Penguin’s Hollywood Party! Starting on the “Penguin High 3” set, everyone can begin their quests to become directors – and members can be superstars! The “High Speed Getaway” stage opens Feb. 16 and member action-heroes will perform crazy stunts! Then, Feb. 17, on the set of “Return of the Space Squid,” members can be alien Sci-Fi stars! For both directors and member superstars, the Awards Show begins Feb. 21 and members will have the chance to earn awards! See you on set at the Hollywood Party at clubpenguin.com.

To summarise what was said: