On the 28th of January there were four different updates in 2011. A new pin was released, System Defender gained a new level along with a new stamp, and the Stage play was updated.

The pin was the Fire Extinguisher Pin and could be found in Club Penguin’s Dance Lounge. It was on the right side of the room. (in the old Dance Lounge design) 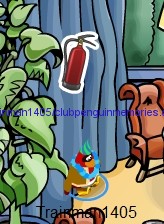 As for System Defender, a new Herbert attack level was added. In addition to that, the Herbert Attack stamp was added and could by unlocked by successfully completing that level.

Finally, The Penguins That Time Forgot was re-added to the Stage. This was its third showing.