On This Day In Club Penguin History – July 25

Today’s ‘On This Day In Club Penguin History’ will bring us back to 2008, four years ago. On this day there was a single update, the first ever Music Jam party. DJ3K, the first game to be in the Night Club, (excludes Dance Lounge) was also added. 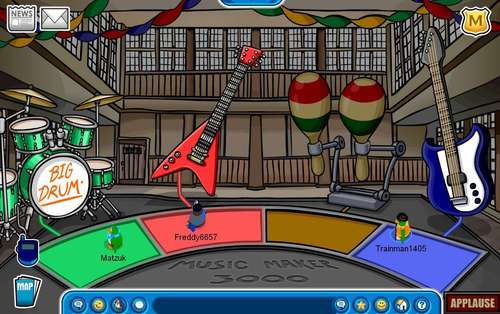 At the Music Jam all penguins could pick up the Maracas (returning item) at the Cove and the Music Jam T-Shirt at the Plaza. Member penguins could access the Backstage room, located at the Dock, to access the special music instrument catalogue. There was also a booth with items (including the VIP pass to access the Backstage) at the Snow Forts. The booth, just like the music catalogue, was members only. Back in 2008 the music catalogue was not in the Lighthouse. Also at this party the Dock changed to a new theme every day. Finally, this was also the first party you could meet the Penguin Band members in person.

As for DJ3K, you could not purchase extra tracks from the catalogue at this time as the catalogue for it (or any game upgrade catalogues in general) did not exist yet. You could also not save tracks to use for igloo music as this was a future update several years down the pipe line.