Here’s something notable from this week’s newspaper issue – Aunt Arctic will be visiting the island during Club Penguin’s Sixth Year Anniversary Party! 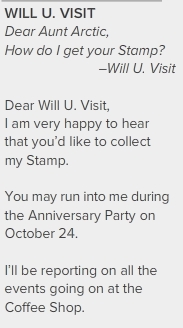 The party will probably go on for an extra day or two past the 24th so penguins have more time to get the Sixth Year Anniversary Party Hat and meet Aunt Arctic. I know she will be having a new background, but do you think her playercard will be updated too? The Penguin Band and Rockhopper have recently gotten new playercard looks. Either way, be sure to use my Aunt Arctic Tracker when she visits!