Lately with the leak of the Shadow Ninja Clothing across some Club Penguin Blogs, it has sparked both rumors and theories. Many of these theories involved penguins claiming this had to do with the “Blackout”, which was listed on Club Penguin’s whiteboard. The image was leaked earlier this year, and so far it’s been about 99% accurate. However, I have a different theory. The Shadow Ninja clothes could very well be in the Martial Arts Ninja Catalog Update coming at the end of the month. It seems possible that these fabled yet real clothes could make a debut in the catalog. If so, why was Happy77 wearing them a month ahead? It’s been almost unheard of that Club Penguin Staff Members publicly test items outside of their servers – the only other time I recall this was when Screenhog had the Whirlpool Flooring in his igloo a few days before it was released, way back in 2008. 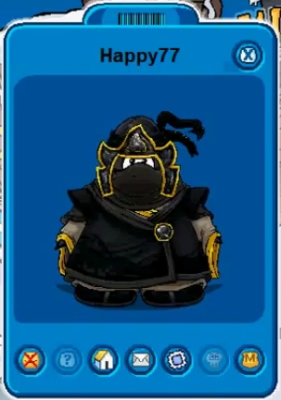 If these Shadow Ninja clothes won’t be in the catalog and are a ninja journey, why would they be testing the clothes already if we won’t have a new ninja journey until November 2011, five months from now? They prepare ahead yes, but not super early. So that got me thinking….

…Could these Shadow Ninja Items be Elite Penguin Force related? It’d be kind of strange, I know. However, there’s the Everyday Phoning Facility Room where Herbert attacked. Will that room be gone and sealed off eventually, or will it be converted into another EPF room extension? There could always be a ninja class of the EPF – kind of like a special rank? Who knows. It’s just a thought I had, and I didn’t want to post the theory everybody else was. :)