On the 28th of January there were four updates in 2011. A new pin was released, System Defender got a new level and a unlockable stamp, and the play at the Stage was updated. 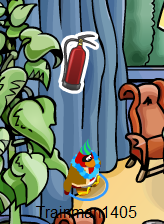 The new System Defender level featured Herbert. In addition to the new level the Herbert Attack stamp was added and could by unlocked by successfully completing the newly added level.

The final update in 2011 was The Penguins That Time Forgot being re-released at the Stage. This was the play’s third showing.