Two days after Puffle Wild was released for iOS I have completed it. Either I’m really good at it, the game is easy, or I have no life. Probably the last one of the three.

If you’ve played Candy Crush, Bejeweled, or any other match three game before then you should have no problem playing Puffle Wild. All you have to do is get 3+ matches of a certain O Berry and try to beat the level’s objective if there is one as well as meet the minimum required score. Along the level map you’ll access new Raccoon, Deer, Bunny, and Unicorn Puffles. There’s really nothing else to the game. It’s addictive, fun, but not really a “new” type of game since there already tons of match three games out there. Luckily there are the bonus Puffles. Since gameplay is very straightforward I’m not going to give an in depth review. Instead, I present to you a very amateurly filmed video of the final level. In the beginning I do give a very brief overview of the app. Basically being a member so you can use the Puffle powerups in the levels is a big help, but other than that there are no extra purchases you have to make to make the game easier so you can win.

More levels are on the way, probably in other areas of the map that you cannot yet access. When they’re available I’ll definitely post about them. If you want to get the game but don’t live in Australia or New Zealand then click here for instructions. 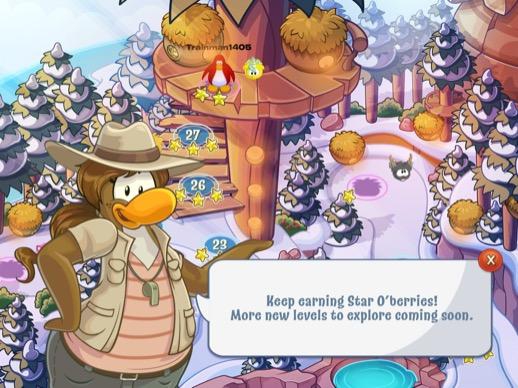 The game is very stable. So far I’ve encountered only one or two minor bugs and the app has never crashed for me which is great. Good job, development team! How about now you go take a break and patch those item adders you seem to be ignoring. ;-)

31 thoughts on “The Final Level of Puffle Wild”