NOTE: Due to Adobe Flash being retired, some of these may no longer work!

What's an adventure party without any surprises? Roll over the icon in this plugin and look what appears...

Appearing on Club Penguin at the Music Jam and Penguin Play Awards, this button, when clicked, plays an applause noise! This is perfect for any type celebration, awards, or performance. Supported in English, French, Portuguese, and Spanish languages.

The fire and water elements are a big part of Card-Jitsu. Why not show your appreciation and add them to your website?

It looks like an innocent penguin dressed up as a rooster, but what happens when you click on it? It moos!

It looks like some ghosts are following you and watching your every move! This adds a purple ghost to the top left and a blue ghost to the bottom right. This can be changed by modifying the CSS nested inside the HTML.

An igloo music widget directly on your website! It comes with several song selections and also includes the option for no music.

The current song selection is as follows:

Halloween isn't complete without pumpkins! Roll your mouse over it to make the pumpkin light up.

Adds a snow globe to the bottom right corner of your website. When you click it, it shakes back and work!

D'oh! Everybody makes mistakes. Roll your mouse over the penguin in the demo page below to see what the yellow penguin's is!

Celebrating? Add some black and orange streamers to the top corners of your website! The colours are also perfect for Halloween.

Underwater submarine, eh? Go to the demo, click on the image, hold down that click, and move your mouse around. Oh, and pretend the submarine is underwater while you do it. :P 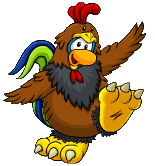 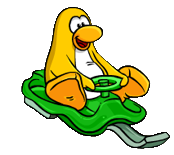 Credit goes to Cena12121 for the Card-Jitsu element GIF images and Happyblue128 for the ghost GIF images.

All Club Penguin Code is written by Trainman1405 unless stated.

All graphics used are owned by Disney's Club Penguin. Used without permission.